An update: Here’s the link to the updated 2015 rankings

For the making of the rankings you will see here I used those excel files I created, based on that awesome FINA handbook (and updating it with the results from recent SWC’s). Swimming is different from Track & Field because of the real possibilities for swimmers to win multiple medals in a single SWC. In T&F it’s rare to see athletes win 3 medals in a single championship, and it’s really unique to see an athlete grab 4 medals. In swimming, it’s not unusual. One has to be pretty fucking awesome to win 4, 5 or 6 medals, but it is possible, and you don’t even have to be an all-time legendary swimmer to achieve that, as you will see shortly.

As in the overall medals posts, I created separate lists for 1) the most medals won overall, and 2) for the most gold medals won, in a single SWC. Both lists are obviously prestigious as hell, but it is not the same to win 5 medals with 2 of them being gold, one silver and two bronzes, and winning 5 medals which are all gold. One must distinguish between the two. Otherwise, it’s chaos and anarchy and who knows what will come next…

The criteria to enter those exclusive lists are as follows – a swimmer must win 3 gold medals in one championship to enter the “Gold Medals” list, and 4 medals overall to enter the “Total Medals” list. We’ll see that several swimmers even managed to do so more than once. So come on, let’s have a look at the most successful individual hauls in the history of the Swimming World Championships. We’ll give the female swimmers the honor of opening these series of two posts, and the male swimmers will follow.

Without Freddy Adu, here are the all-time tables…

Most of the numbers are pretty straightforward, but nevertheless here are some clarifications: The leftmost numbers on each list are the rankings. I could only give as much fucks as to rank the most important places. I gave up on those with all the 4 total medals. Didn’t think it was soooo important to distinguish 35th place from 36th. The ranking between swimmers with similar amount of total medals was based on the number of gold, silver and bronze medals in that total – this is given right next to the total number of medals won, right before the year in brackets, which denotes in which edition of the SWC this happened. Obviously, when you see “6 – 2,3,1”, this means that the swimmer won 2 silver medals, 3 bronze medals, and 1 gold. Ok, just kidding, but don’t make me write the correct order. You know it already.

So yes, those are the numbers. Now let’s dive into them.

1st on both lists – the incomparable Missy Franklin and her jaw-dropping 2013 campaign. In 2013 Missy did what no woman has ever done before in the history of the SWC’s, and won 6 golds in a single championship! 6 medals were won before, but never 6 golds. The closest one was Tracy Caulkins in 1978, who won 5 golds and one silver. However, one must also remember that Frankin withdrew from the 50m backstroke event. I dunno how she would’ve fared in that event, but as a non-professional swimming observer I feel that she is not the sprinter type. 100m and above – that’s her territory. She is the undisputed queen of the backstroke event, and has been this way since her 2011 campaign, which is ranked 12th in the overall list. And remember- Missy was only 18 in 2013!! She has so many great championships ahead of her… Two top-12 entries, including the top spot, at 18 years of age?! Damn, you go girl! I really feel like I was blessed by the flying spaghetti monster because I can watch her compete. She is totally the female Michael Phelps. 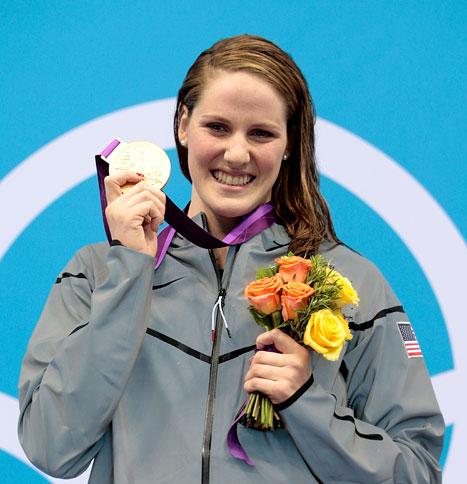 I wonder which tune Missy got to hear more during 2013: “Blurred Lines” or the national anthem?

Like I mentioned earlier, Tracy Caulkins’ 1978 campaign is 2nd on both lists. In fact, up until 2007 Tracy singlehandedly held the record for the most gold medals won by a woman in a single SWC. And she held it for almost 30 fucking years!! Sadly, Caulkins is not as famous as she ought to be. Perhaps this is due to her Olympic career which was not as successful – only three golds at the 1984 Olympics. However, this is not her fault, as she was forced, like many others, to not participate in the 1980 games because of fucking politics. This should have been her greatest hour – she was 17 years old, two years after her glorious 1978 SWC campaign, and bam! Afghanistan, boycott, yada yada yada… A pity. She was a great medley swimmer, though…

In 2007 Lisbeth Trickett equaled Tracy’s record of winning 5 gold medals in a single SWC. And this was two years after she already won 5 medals in the previous edition, as you can see in the overall table: Lisbeth occupies the 6th and the 10th spots on the all-time overall best hauls. Lisbeth was an awesome sprinter back in the day, and she had this permanent smile that prevented anyone from hating her. Seriously, I don’t believe a single person in the world ever hated Lisbeth. It’s like hating unicorns. Lisbeth is right up there in the all-time most loveable athletes list.

Anyway, let’s return to the overall all-time list. The third best overall haul ever at the SWC belongs to Kristin Otto, whose awesome 1986 SWC (4 golds, 2 silvers) came just in time to prepare her for the 1988 Olympics, which were one of the most successful ever for a female Olympic athlete.

Fourth place all-time is Shirley Babashoff, who, with her 2 golds, 3 silvers and one bronze at the second ever SWC (1975) held for three years the record for the best haul in a single SWC. Sadly, Shirley was probably known as the silver queen back in the day, due to her enormous amount of silver medals – 7 medals of her 10 total in the SWC’s and 6 of her 8 in the Olympic Games came in that color. However, even in that department she was relegated lately to 2nd place, by… Well, we’ll see who exactly in a bit.

The only other swimmer who managed to win 6 medals in a single SWC is Mary T. Meagher, who did it in 1986. In fact, 1986 was the only edition in which two female swimmers managed to win 6 medals. Indeed, in three of the events at that SWC, Kristin and Mary both won medals. Mary’s haul included 1 gold, three relay silvers, and 2 bronze medals.

Check out Kornelia Ender – she won 5 medals in successive SWC’s! Her record in them was identical – 4 golds and one silver, and she occupies two of the #7 spots in the overall list. Kornelia did it in the first and second editions of the SWC’s, and her unique achievement of winning at least 4 gold medals in two successive SWC’s still stands. Even Missy Franklin didn’t manage to break it (yet). Lisbeth Trickett came close to equaling it in 2005 and 2007, winning 3 and 5, and Missy then won 3 and 6 in 2011 and 2013, but no one has yet to win 4 and 4 (at least). However, it’s just a matter of time. A matter of 7 months, to be exact, before Missy breaks it and sets a new record of 6 and 6.

Another couple of swimmers who managed to win 5 medals twice in a single SWC are the two great American swimmers – Jenny Thompson and Natalie Coughlin. Like we’ve seen in the posts about the overall medals leaders in the SWC’s, Natalie was never a gold digger – she won some gold medals, but it was never the amount expected of great swimmers. And we see it here too – two times Natalie won 5 medals in a single championship, but one time it was with two gold medals and one time it was with a single one. Jesus.

There are three more swimmers that I would like to talk about: Lying at 13th place in the overall list is Laure Manadou . The French swimmer was once the great promise of the swimming world. I remember her from the 2004 Olympics, when she burst onto the world scene excelling at both the long distances and the backstroke events, and then, 3 years later, she won 5 medals at the Melbourne SWC. But then she simply drowned in the Beijing swimming pool – I have no other description for that. In between we got the telenovella of her and Federica Pellegrini fighting over a single male swimmer… It was really bizarre. And now I hear that she is an ex-swimmer already, never living up to her full potential. But oh well, we will always remember her triumphs at the 2004 Olympics and the 2007 SWC.

Another special swimmer is Alicia Coutts, who holds a truly unique achievement. Alicia is an Australian swimmer, who is already 27 years old. I first heard of her at the 2011 SWC, when she won 2 silver medals and a bronze one. But she outdid herself in Barcelona, two years later, when she won a total of 5 medals, ALL OF THEM FUCKING SILVER!!! 5 silver medals!!! I remember watching the competitions and after her third silver thinking to myself – “right, so now she’s bound to get a silver medal” when she competed in a final. Now, I didn’t really believe that, it was just for kicks – but there you go! Another silver! And then another one! What?! That was really something unbelievable, that one! Five silvers! A truly unique achievement. And now Coutts has 8 SWC’s medals total over the course of her career, 7 of them silver… In the London Olympics she fared a bit better, also claiming 5 medals, but one of them being gold (but she didn’t neglect the silver department – 3 of them were of that color). I officially proclaim Alicia as “The Silver Queen” from now on.

The last swimmer I would like to mention is the amazing Katie Ledecky. This girl surprised everyone (well, me!), winning the 800m Olympic title in London, when she was only 15 years old. Little did we know that it was just a glimpse of what is yet to come. One year later, at the 2013 SWC, she delivered the most outstanding performance of anyone not named Missy Franklin, winning 4 golds, setting 2 WR’s, and winning the “female swimmer of the meet” title. AND SHE WAS 16 YEARS OLD AT THE TIME!!!

Now Katie is older and wiser, at 17 years of age, and she will be 18 when she competes at the 2015 SWC. The dominance she displayed in the long distances led everyone (well, me again) to name her the female Sun Yang: she already dominates the 400-800-1500m freestyle, and the 4x200m is also a guaranteed gold. However, if she wants to have a go at Tracy Caulkins’s and Lisbeth Trickett’s “5 gold medals in a single SWC” achievement, she can also make a run at the 200m freestyle title… Her PB in that event is really good, and if she does – we can get a battle between her and Missy Franklin… Wow! I almost literally drooled over my front from the mere thought of that awesome battle…

Katie Ledecky, Missy Franklin, and their favorite pieces of jewellery.

Well, that’s it. In the words of Forrest Gump, “That’s all I have to say about that”. Next up – the male swimmers!