Jesus Michael, you’re still writing Olympic summaries? Rio 2016 ended like 5 months ago! Yeah, it feels like it. But what can I do, these rankings take a lot of time to make and write. Although it’s still a huge enjoyment to do them. So yeah, I want to finish the whole lot. Dunno if I will do the Gymnastics stuff, though. We’ll see how things go.

But now it’s time to rank the women’s top track & field performances in Rio. I must admit, it was tougher to decide here who will make the top 10 and who will be left out. And the internal order of the top 10 was also very difficult to determine. I’m still not confident that I’ve done it justice.

Anyway, some great performances that I left out of the top 10 include:

10) Caterine Ibarguen – gold in the triple jump (15.17m). The woman whose name is synonymous with the event for the past 3 years avenged her silver medal from London. It was the most sure-thing in the women events, even more than Sandra’s Discus gold. Every time Ibarguen jumps it’s a huge show and she also has this exciting jumping style – the complete opposite of silver-medalist Rojas. She approved her status as the only jumper who can regularly make jumps of 15m+ by jumping the 29th best result of all-time.

9) Caster Semenya – gold in the 800m (1:55.28 minutes). Wow. I’m not going to write about all the controversies surrounding her. I like Caster ever since her Berlin 2009 performances. Her win at the 800m was among the easiest wins there were in Rio, the way she just accelerated effortlessly when they were nearing the finish… pffff… She set a PB which is the 20th fastest time evar (only 0.09 of a second behind Maria Mutola’s lifetime best), and judging by the way she ran I reckon she can definitely improve it further.

Damn I love how she does that “take that dirt off your shoulders” gesture. Any Jay-Z reference at the Olympic Games is bound to make the top 10,

8) Ruth Beitia – gold in the High Jump (1.97m). Forget about the crappy result. It’s the story that got her the 8th spot… Grandma Beitia won the gold at 37 years of age, on her 4th Olympic attempt. True, she shines at the worst era of women’s high jump since I started to follow track & field, and I really really hate her visually challenging jumping style, but hey – SHE IS 37 YEARS OLD!!! I’m not happy about her win, I was cheering for Blanka who herself is already 32 years old, but I can appreciate Beitia’s incredible journey.

7) Nafissatou Thiam – gold in the Heptathlon (6,810 points). What a surprise! I admit I was supporting Jessica Ennis-Hill, but Nafi was simply superb. I mean, she set 5 PB’s in the competition!!! Talk about bringing your A-GAME when it matters. Her 1.98m in the high jump was the cherry on top of a beautiful cake (what a horrible metaphor. I make myself sick) – it was the best result ever recorded in the event during a Heptathlon. I made a prediction then that it will be enough to win a medal in the High Jump in Rio, due to the event being at a low point in terms of results. But little did I know – it was higher than Beitia’s winning height! Thiam was originally scheduled to participate in the High Jump as well, but she DNS’d. What a Peaty. Anyway, 6,810 points is a huge PB, but more importantly – she can easily become my favorite Heptathlete once Ennis-Hill retires!

6) Vivian Cheruiyot – gold in the 5,000m (14:26.17 minutes), silver in the 10,000m (29:32.53 minutes). Vivian is a true veteran. She competed back in Sydney 2000, can you fucking believe it? She already won medals in both the 5,000m and the 10,000m in London, but in Rio she upgraded them one color up. In the 10,000m she was part of the greatest race of Rio 2016, and she finished second behind Ayana, with the 3rd best result evar, only 0.75 of a second shy of the previous WR and ahead of two-time Olympic champion Tirunesh Dibaba. But it was the 5,000m that earned her a place in the top 10: Just like everyone else, I thought that it was a sure-thing for Ayana, especially after she built this huge lead, just like in the 10,000m final, but Cheruiyot thought otherwise. She cut down Ayana’s lead and passed her in the final lap. It was unbelievable. Cheruiyot’s time was a new OR, a huge improvement of 14 seconds over the previous one, and the 21st fastest time evar. After a silver and a bronze in London , Vivian finally won her first Olympic gold. One of the greatest long-distance runners of the last decade.

One of the things I love the most about Cheruiyot is that she always has time for her fans.

5) Tianna Bartoletta – gold in the Long Jump (7.17m), gold in the 4x100m Relay (41.02 seconds). What a star! Tianna did not do too well in the individual 100m, failing to advance from the semi-finals, but she did her thang in the relay, and struck gold. Her performance in the Long Jump was really amazing. After winning her second World title last year, a whole decade after winning her first one, she went on to win one of the best Long Jump competitions I have ever seen. The battle between her and Brittney Reese was epic, and Tianna only won with her 5th jump, with Reese really pushing my nerves to the limit with a last effort of 7.15m. I try hard to think when was the last time I saw a jump such as Tianna’s winning effort, and can’t really remember – for a good reason! It was the longest jump in a big championship since I started following track and field, and a new awesome PB for Tianna.

4) Ruth Jebet – gold in the 3,000m Steeplechase (8:59.75 minutes). Jebet is a league of her own. The question was not whether she can win the Olympic title, but whether she can break the WR. Throughout the race I thought she is on the right pace to do it, but a slower 3rd kilometer ruined her chances, and so she “only” finished with the 2nd fastest time in history, less than a second slower than Galkina’s WR. She saved the WR for less than two weeks later, though…

3) Anita Wlodarczyk – gold in the Hammer Throw (82.29m). A really tough decision, and I thought about giving her WR the second place here, but in the end decided against it. The Hammer Throw is a One Woman’s Show, and Wlodarczyk made amends for her London silver. Four of her throws in the final would have won her the gold, and twice she threw the hammer further than her pre-Rio WR. Magnificent.

2) Elaine Thompson – gold in the 100m (10.71 seconds), gold in the 200m (21.78 seconds), silver in the 4x100m Relay (41.36 seconds). The female Usain Bolt? Well, not quite, although her results in the 100m and the 200m were relatively better than Usain’s. I really came to like Elaine in Rio, after not being sure about how I feel about her before the games. I thought she can be the next great Jamaican sprinter, the next in the line of Merlene Ottey, Veronica Campbell-Brown and Shelly-Ann Fraser-Pryce, and in terms of PB’s over the 100\200 she was already the best of the four, but she needed them titles to cement her status. And titles she won, big time. Thompson became the first woman since Flo-Jo in 1988 to win the 100\200 double. Her time in the 100m is the 2nd fastest all-time in the Olympics after Flo-Jo’s 10.62 seconds, and the 12th best time evar, only 0.01 of a second off her PB. And it looked so easy too! After she won the 100m I betted on her to take the 200m too, and to avenge her loss to Dafne at the Worlds last year. And indeed, she won it like a true champ. It wasn’t an epic duel between them as it was in Beijing, but still, 21.78 seconds is the 26th fastest time evar. All in all, Thompson, who is 24 years old, is already the 4th fastest woman evar over 100m and the 5th fastest woman evar over 200m. May she live long and prosper. 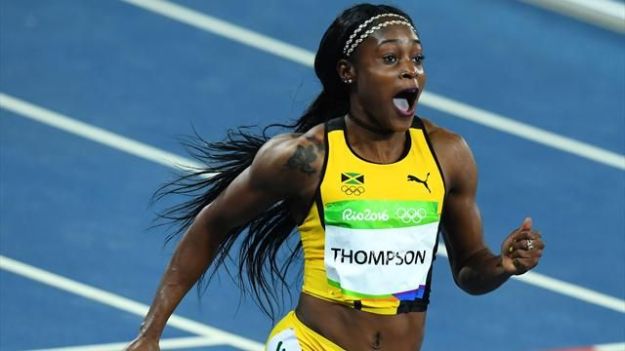 I looove Elaine Thompson, I really do. But what’s with that neck bracelet thing? I remember a time when all the girls used to wear that. That time was 2000…

1) Almaz Ayana – gold in the 10,000m (29:17.45 minutes), bronze in the 5,000m (14:33.59 minutes). Her 10,000m is THE performance of the track & field events in Rio, regardless of gender. A race and a result that no one could anticipate. When I was watching it – it felt unreal. Did they missed a lap or something? Is the track shorter by 15cm? WHAT THE FUCK IS GOING ON HERE?! Until Rio, any result under 30 minutes was an amazing achievement, but here Ayana led three other runners to dip below that mark. In fact, 4 of the top 5 all-time best times in this distance were recorded in that race. In only the second time she ran the 10,000m on a track she smashed Wang Junxia’s unapproachable WR (When I did the women’s WRs rankings the 10,000m was ranked 6th) by no less than 14.33 seconds. Please read that last sentence again. After that amazing performance, I was sure she is going to win the double easily, and probably even better Genzebe’s WR. However, in an inexplicable turn of events, Ayana – the best 5,000m runner in the world, who earlier this year recorded the 2nd fastest time evar, finished only third. But still, two medals and THAT 10,000m performance is enough to rank her first.

In a female twist on the men’s Discus Throw saga, I bet the Dibaba sisters really hate Almaz Ayana by now…