The All-Star weekend is behind us. It’s weird, I waited a year for this event, and now that it’s over I cannot feel not-disappointed. What is felt cannot be unfelt! Many of the events were really disappointing, although definitely not all of them. In the first part of my all-star summary, I will look back at what we had. In the second part I want to look at how I fared with my reviews and predictions of the leaders in the various statistical categories. I don’t want to mix the stats stuff with the non-stats stuff. Damn, saying that last sentence aloud is really difficult, at least for me it was. All those s’s… try it yourself!

Or, as they like to call it officially: “Rising Stars Challenge”. Jesus, doesn’t “rookies and sophomores” sounds more intuitive? Anyway, I don’t watch this event every year on a regular basis, just from time to time, when there are some interesting rookies that I look forward to watch in action. I believe the first time I watched this game was in 2004, when LeBron, Carmelo and Wade lost to Amar’e Stoudemire. Yes, it was a 3-on-1 game.

This year I was really interested in seeing several players – Giannis, Wiggins, Rudy Gobert… In fact, Team World fielded such a strong line-up that I thought they are the favorites to win the game. And that’s with Steven Adams (whose awesome sister can count on being inducted to the blog’s Hall Of Fame in the near future) out.

Anyway, the game itself? Meh…Yes, it was very nice to watch the Greek Freak in action, and he had some very nice moves. But overall the game was disappointing (as you may have noticed already – this word and its various derivatives will appear very frequently in this post). My favorite player by far was Rudy Gobert, and he was the only one who actually played some defense. He deserved the MVP trophy and not Wiggins, although Andrew also had a good game. But anyway, I didn’t like the lack of defense and the overall level of play didn’t impress me much. 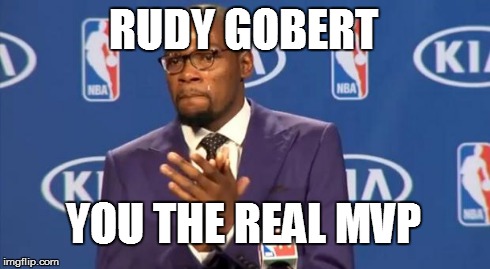 Even KD knows it!

Yes, I’m cool because I say “skillz” instead of “skills”. That’s how we roll at Tel-Aviv University, yo.

This is a contest I actually liked a lot in the past, but they updated the format this year. They changed it to a head-to-head contest, and the course itself was changed to a less-PG (JaVale McGee: “less Paul George?”) oriented one, and now it puts more emphasis on shooting. I really liked all the passing challenges, but now they have only one in the entire course. I cheered for Jeff Teague, but he got reckless and allowed Patrick Beverley to come behind for the win. Amazingly, Beverly did the same thing in the final match-up, and I admit it added an element of fun to the contest. But I will be really grateful if they return the old format for next year’s event.

Contestants-wise, it was the greatest three-point shooting contest evar. Performances-wise? A good candidate, but probably not. Maybe in the top 5. I kept my fingers crossed for Steph, and was really glad to see him go through the first round. Klay made it to the final round as well, but my third favorite – Korver, disappointed, and was eliminated.

The final round was all Steph. That amazing stretch in which he scored 13 shots in a row! Wow, how crazy was that! Although I must admit I don’t like the new format, with the extra money balls. It doesn’t allow you to compare properly the scores to the ones from the past. I mean, should we compare percentage-wise, relatively to the maximum possible score? But the players in past years didn’t have the privilege of shooting a whole rack of money balls, we don’t know how they would have fared with that. Or should we just compare the numbers of balls that went in? But then the money balls lose their significance, while in fact the players may approach and treat them differently… It’s all very tricky and I fucking hate that.

What I do know is that Steph’s performance in the final round was the best I have ever seen in this contest. I don’t remember Kapono going for 25/30 in the final round of the 2008 contest, although I definitely watched that event. Maybe I’m biased because it’s Steph. Hmmm…

Let’s start with the good stuff – Zach LaVine pulled off the most amazing performance in the dunk contest in several years. The bad stuff? Despite his exploits, this event can’t be remembered as a great one, because everyone else didn’t provide a decent competition. Giannis was the real disappointment for me – his choice of dunks sucked, and he didn’t use his amazing athleticism as he should have. Mason Plumlee? Well, I didn’t expect much of him. Plus he looks like a typical douchebag from a high school comedy. Oladipo had one good dunk – that 360/540, whatever you may call it (personally, I call it “Steve”), but that’s it. LaVine, on the other hand, delivered on each and every one of his dunks, with my favorite being the behind-the-back slam. The performances from recent years are all mixed-up in my head, a testament to their greyness, and I can’t recall a particular performance which dazzled me so much. Maybe JaVale McGee, when he was robbed of the title against Blake Griffin. Anyway, overall I enjoyed the contest, but the credit goes to a single player – Zach LaVine.

Frankly? A major disappointment. I love watching the all-star game, I look forward to it every year, I vote for the starters on the NBA.com website, and since I started watching it in 2002 I didn’t miss a single game. But I didn’t enjoy it even a bit for the past two years. The lack of proper defense throughout the first 3.5 quarters was always a feature of the all-star game, but in recent years they brought it to whole new levels. It’s fucking ridiculous. It’s like they will be really upset if they don’t score 300 points. No one plays defense, everyone dunks and shoots uncontested three-pointers, it’s really not fun to watch anymore. When no one is playing defense, how interesting can it be to watch the best players go against each other? They’re not really competing anymore…

It used to be more interesting in the past, and when I’m talking about the past I don’t mean the good old times of 30 years ago. No, I’m talking about 10 years ago, and even less than that. When the score was still very high, but not the crazy-high it is now. I couldn’t even be impressed with Westbrook‘s 41 points. On the contrary, I hoped he won’t break Wilt’s record, because had he broke it, it would have been a bit artificial, at least to me. It’s less of a problem to score 42 points when no one is guarding you and when the score is 163-158. I really missed Joakim Noah in this year’s game – at least he takes the whole thing seriously. And Kobe too, if he wants to.

BTW, speaking of Westbrook, did you know that in 4 all-star games, Russ accumulated an astounding total of 8 assists? Wait, what?! Yes, I shit you not, 8 fucking assists in 86 minutes of playing time, for the PG who averages 7 assists per game throughout his career… Un-fucking-believable.

Anyway, so no, I didn’t enjoy the game itself. I will obviously watch next year’s game, and the ones that will follow, but I really hope that someone will put a stop to this abomination. I don’t want them to play with playoff-level defense and intensity, but I’m sure they can do something between that and what goes today. I mean, they did that just 7-8 years ago… I don’t watch the all-star game to see fucking dunks and three-pointers. We’ve got special competitions for those things. I want to watch the best players in the game sharing the same court and going against each other to see who has the largest… er… something.

Adam Silver – please, do something!

Assists? Ain’t nobody got time for that! Let’s score some points!