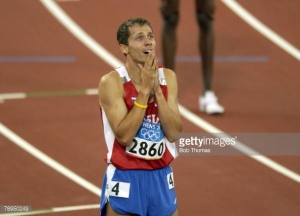 I admit – this wasn’t my original intention. For my next Hall Of Fame induction I was planning to introduce an athlete in a sport which is not track & field – because despite the evidence for the contrary, this is not a track & field Hall Of Fame. It embraces all sports without considering their race, age, religion, sexual orientation, etc. But Borzakovskiy just recently announced his retirement from the world of sports, and I decided to make a change of plans. Yuriy was one of my all-time favorite track & field athletes, and his place in the Hall Of Fame was guaranteed, but I used this opportunity to honor him and induct him now instead of sometime later.

So… Yuriy Borzakovskiy! One of the greatest 800m runners of the past 15 years. Never a world record holder or a world champion, but he has been an Olympic champion, a four time medalist in the Athletics World Championships, a European champion, a mainstay in the discipline’s elite for the past 15 years, but perhaps more than anything – like Kajsa Bergqvist, he possessed a style which probably made him a favorite of the neutral sports fans.

I probably saw Borzakovskiy for the first time at the Sydney Olympics, although I really have no recollection of him from back then. He then made it to the final of the 800m, at the age of 19, and finished 6th. I’ve seen this race several times since then, but the only thing I definitely remember from watching it live in September of 2000 was that Wilson Kipkepeter – one of my favorite runners back then, didn’t win the gold medal.

My first formal introduction to Yuriy was during the 2001 season. As I mentioned in some of my previosu posts – it was then that I first started watching the Golden League circuit, and I remember vividly the two stars of the 800m circuit in that season – Andre Bucher from Switzerland, and Borzakovskiy. And boy, that was something to behold!

Bucher, the Swiss, was the more experienced runner, at 24 years of age. Yuriy was the young star with a unique and interesting running style – which he maintained throughout his career. Borzakovskiy used to hang back at the end of the pack for the first 400m and it was not unusual to see him running last as the bell sounded. But then he would pick up his speed, and try to surge forward using his awesome sprint abilities. He would run faster than anyone in the home straight, trying to overcome his competitors who were not possessing his sprinting abilities. This strategy is obviously very risky and didn’t always work, but when it did – it was an awesome sight. And even if it didn’t work – it was always very interesting to watch. In fact, I think that after the great one – David Rudisha, Borzakovskiy is the 800m runner whom I enjoyed watching the most.

But anyway, we were talking about the 2001 Golden League. Those duels between Bucher and Borzakovskiy became legendary. There were 7 meetings that season. One of them – the Bislett Games in Oslo, didn’t feature neither Bucher nor Borzakovskiy. In the other six meetings the winner was either Bucher or Yuriy, and they went 1-2 in four of them (with one meeting featuring only Andre)! Damn, talk about dominance.

Now, it’s true that Bucher was the dominant of the two. But it was Yuriy’s presence which pushed Bucher to test his own limits, and in fact they both benefited from the awesome competition between them. Meeting after meeting they bettered the SB, with Yuriy always coming second to Bucher. In Zurich, Bucher ran an amazing (by the early 00’s standards) 1:42.55. Back then it was the 17th best result of all-time, and Bucher himself became the 5th fastest man evar in that event. This was the one race in which Yuriy didn’t finish in the top 2. However, he bounced back a week after that, in Brussels. I remember myself watching that race, and I really get the chills.

Do you see how far Yuriy is from Bucher at the 400m mark??? And that’s not me or some other poor 800m runner leading the race, that’s Andre fucking Bucher! This race is one of Yuriy’s greatest moments, and the result – 1:42.47, remains his PB. Back then he vaulted himself into 14th place all-time in terms of result, and also took Bucher’s place as the 5th fastest man evar in the 800m.

The 800m was one of the highlights of that Golden League season, but the greatest duel between Andre and Yuriy – the one on the greatest stage possible for that year – that of the Athletics World Championships in Edmonton – didn’t happen. From what I’ve heard, Yuriy’s coach convinced him not to take part in the World Championships for some reason, which was really really stupid, because Yuriy was in the best shape of his life. We, the fans, were denied a great battle for the gold medal between Bucher and Borzakovskiy, and with Yuriy’s absence Andre had no trouble in winning the gold in Edmonton.

That same stupid coach was also responsible for yet another really weird decision, and that was to make Yuriy run the 400m in the 2002 European Championships. I really can’t understand the way that coach was instructing Yuriy in those two years. Yuriy was a decent 400m runner, but with a PB of a mere 45.84 he had no chance against Europe’s elite runners. You know where he did have a chance? In the fucking 800m, that’s where! But no, why give your athlete a chance to battle for the gold medal at his favorite event, when you can make him battle for a place in the final in some other event! Yuriy made it to the semifinals in the 400m, but couldn’t qualify for the finals. Thus we missed a golden opportunity to watch this amazing 800m runner compete for gold medals in the two most important competitions in those two years.

But hey, in 2002 Yuriy was only 21 years old. More great things were to come, and none greater than the one that came in the summer of 2004, at the Athens Olympics. Having finally participated, after a two years hiatus, in the 800m at a major outdoor championship the previous year, he managed to win the silver medal at the Athletics World Championships. However, the field in Athens was a very strong one, featuring the world record holder Wilson Kipketer – on his quest to finally earn the elusive Olympic gold, world champion Said-Guerni, world leader Wilfred Bungei, and the always dangerous Mulaudzi.

And here in a better quality, but with no english commentary:

The race was an instant classic. Borzakovskiy started out at the back, as usual. And in fact, as you can see in the video, he is second from last at the 400m mark. But then he picked up his speed, as he usually does. Back home I cheered for him, but I didn’t think he could make it all the way to the top. I thought that a medal would be great and I hoped that he can make it to the top 3. I didn’t think Kipketer, whom I also liked, would let anyone or anything to come between him and his well-deserved gold medal.

Entering the home straight, Yuriy was fucking fifth! Can you believe it?! He passed 4th placed Said-Guerni with only less than 50m to go, and then surged for the top 3. Bungei was already dying in the inside lane, but Kipketer thought he was running towards the gold medal, with Mulaudzi close behind him. But Borzakovskiy, running on the third lane, managed to outrun all of them with his amazing finish.

I went ballistic. Here he is, one of my all-time favorite track & field athletes, employing this awesome strategy of his, and surging from behind for a win at the biggest stage. It doesn’t get any better than this. Well, in fact it does – Yuriy was so emotional after the win, and the amount of tears he shed on the podium was very moving, that if it weren’t for Hicham El Guerrouj’s amazing and ultra-dramatic victory in the 1500m (I’ll write about it sometime), Yuriy’s win would have ranked as the greatest one – at least for me, in the track & field events at the Athens Olympics.

BTW, Kipketer was relegated to bronze medal after the stumbling Mulaudzi passed him right on the finish line. I don’t think it made much difference for Wilson – if not gold, then silver or bronze makes little difference. It’s a pity that this great runner finished without an Olympic gold medal.

So yes, the Olympic triumph was Yuriy’s greatest moment. He followed it up by winning three more medals at the World Championships – a silver in 2005, and bronzes in 2007 and 2011, and he also won the 2012 European Championships. In fact, his durability and longetivity are worth mentioning. So… er… let’s mention them. He remained a member of the top 800m runners in the world for over a decade, which is quite remarkable. I guess that as his age progressed it became harder for him to employ that same late-surge tactic that was his trademark. But he was always there – usually making it to the final in the major competitions. In fact, Yuriy holds both the record for the most medals at the 800m in the World Championships – 4, and the record for most finals appearances in the event – 5 consecutive ones from 2003 to 2011, when the only time he didn’t win a medal – in Berlin 2009, he finished 4th.

There’s also this extra quality of what impression the athlete is making. Borzakovskiy was very likeable, and always seemed to me like a very nice and humble person, which made it easier to like him. He didn’t have that “superior” aura that Rudisha has, for example – which is not a bad thing, BTW.  By it I mean that he didn’t seem like he was obviously better than his competitors. Maybe that was due to the fact that the tactic he employed demanded that he exerted so much effort in his attempt to catch the leaders. Also, I believe that his tactic was responsible for the fact that despite being consistently one of the top 800m runners for over a decade, his victories gave the impression of underdog victories. A “fact” :-). Well, it’s not so much a fact as it is my own impression, but hey – this is my blog and this is my Hall Of Fame that Yuriy is being inducted into, so yeah, a fact.

I dunno whether people – track & field pundit and fans, expected greater things from Yuriy. Maybe they did – after all, he did set the 14th fastest time evar when he was only 21 years old. Perhaps people expected him to threaten the WR, or to become multiple world champion. I don’t know. And frankly – I couldn’t care less. For me he was the most exciting and moving 800m runner of all-time, or at least until Rudisha appeared on the world scene, and the great thrills he gave me by watching him run are unquantifiable.

Thank you for everything, Yuriy. 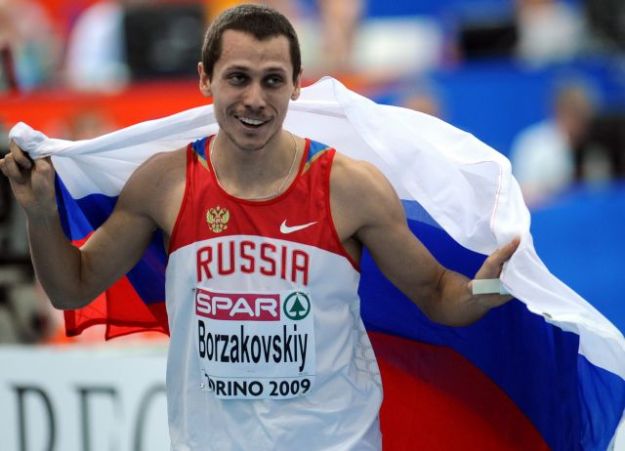