Let’s take a short break from the NBA playoffs to talk a bit about football. We just had the UEFA Champions League semi-finals, and as I watched them a question popped into my mind – who is the greatest Brazilian scorer in the history of the Champions League? Perhaps you would like to venture a guess too? Go on, it’s free. Think about the Brazilian player who you think scored the most goals in the history of this competition (European Cup included). A bonus point if you manage to guess how many goals he scored (and just to remind you – Messi and Cristiano, the all-time leaders, have 77 goals). I guarantee that about 70% of you will be wrong, because the correct answer is quite surprising.

Now, Brazil is arguably the greatest nation in the history of the game. It had produced numerous world class attacking players over the years, but as I tried to think about whom it might be that scored the most goals in the CL, my mind began to stutter. I mean – my initial first hunch drifted towards Ronaldo (First of His Name, King of the Andals and the First Men, Lord of the Seven Kingdoms, and Protector of the Realm), but then I remembered that he never actually had much success in the CL and never played in the final. In fact, and it was quite a shock to me to discover – he didn’t even score 20 goals in the CL! Wow. A far cry from Messi’s and Cristiano’s 77. Now that’s what I call a Mind-Fuck.

Hmmm… so who can it be? Perhaps the legendary Rivaldo, who just recently retired from playing? The player who was THE THING in the late 90’s-early 00’s in Barcelona? I remember him starring for Barca and having some very successful CL seasons. Well, it turns out that Rivaldo did manage to accumulate 27 CL goals to his credit (second all-time among Brazilians), but no – he’s not our top scorer. God damn it.

After I searched the net and found out who the real top scorer is (hold your horses, it’s coming!), I posted the question as a riddle to some of my football-loving friends. And they came with all-kinds of guesses. “Mario Jardel?”, ventured a guess one of them. Now, Jardel is a very intriguing guess, because well – how can you know how many goals this guy has?! He might have scored two goals in his sleep. The guy was a flat-out goal-machine, and even though he played for relatively “small” teams, he might still have accumulated a staggering amount of goals to be the top scorer among the Brazilians. I gave Zohar – the friend who came up with this guess, the medal of ingenuity. However, Jardel is not the answer to the riddle, although he is ranked third all-time among the Brazilian scorers in the CL, with his 25 goals in 46 matches.

Jesus Michael, enough with the fucking tension! Tell us who is it! Ok Ok… But first let me tell you who it isn’t.

The all-time Brazilian top scorer in the history of the CL is not Ronaldo and is not Jardel. Nor is it Rivaldo. It is also not Giovane Elber, the great Brazilian striker from Bayern Munich (24 goals) or Romario (20 goals). Or Hulk. Or Fred. Or even Luiz Adriano.

The all-time Brazilian top scorer is… drum roll please… Kaka! Yes, Kaka! Who was never a goal-machine, despite the fact that he was an amazing player during his spell in AC Milan (there is no “first” spell or “second” spell, because the “second” spell was a joke. I’m an AC Milan fan, and all those unnecessary comebacks – Shevchenko, Kaka – hurt like fuck. So, there is only “the spell”). Who would have guessed that of all the great Brazilian strikers, the all-time top scorer would be Kaka! This is really surprising. And the amount of goals is surprising as well – Kaka scored 30 goals during his CL days, 10 of them during his wondrous 2006-07 season, when he helped Milan win the big-eared trophy and was definitely the MVP of that season in European football. That was his Annus Mirabilis. But he was never a big scorer, and his ratio of goals per game proves that – his 30 goals came in 86 games. Not really a striker’s ratio (well, unless you’re Lord Heskey).

But wait, I don’t think I made enough of an emphasis on this point: 30 goals is what you need to be the all-time top scorer among the Brazilian players?! Seriously?! Are you fucking kidding me?! 30 goals, when the all-time leaders have 77?! Well, this is really fucking embarrassing! Brazil, you should really be ashamed of yourself.

Luckily, we have a player who can fix this awkward situation. I’m talking about Neymar of course. This awesome player is still only 23 years old, but he already scored 13 CL goals in 21 games in the two seasons he plays for Barcelona, plus he still has one game left in this season – the final against Juventus.

On a side note – I’m cheering for the Old Lady in the final. They have some players whom I really love, like the Legend that is Buffon, the Maestro Pirlo, and Rambo Chiellini. They’re Italians, and Italy has been my love for almost two decades. I’m a fan of AC Milan, but I find myself cheer for Juve and Roma in European competitions as well (but not Inter. We hate them). Plus I’m getting really tired of the same teams winning the big-eared trophy. Juventus hasn’t won it for almost two decades. And it will be a great story if they indeed manage to beat the odds and Barca en route to winning for Buffon his first CL trophy at the age of 37. Barca played great football this year, and Messi put an end to the whole pseudo-debate about “the greatest football player of our era”, but still – forza Juve!

Anyway, where was I? Oh yeah, – my preferred method of disposing of dead bodies. So, one of the best ways to do that is to grab the… No, wait – that’s a whole different post. Neymar. Neymar has a chance of beating Kaka’s abysmal record in two years, or three years at the most. Hopefully he will then extend this record to an acceptable amount, of say – 45 goals at the least. But it’s really too early to predict that with certainty.

As a bonus, here’s the top 5 Brazilian all-time scorers in the history of the Champions League:

*Brazilian-born Jose Altafini scored 24 goals in 28 games. However, he scored most of his goals having already obtained an Italian citizenship while playing for Milan (and representing the Italian national team). Therefore he is not included here. 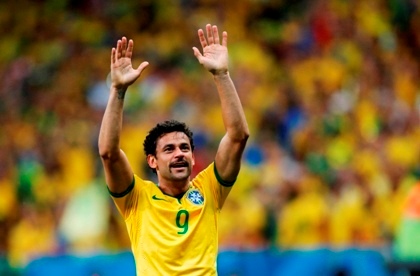 Lord Fred thanks his fans, after gracefully allowing Kaka to take the top spot.