It’s been a while since our first induction to the Blog’s Hall of Fame, so it is time we introduce our second inductee. And this time it’s Israel’s greatest track & field athlete of all-time, one of the greatest pole vaulters of the last 15 years, Aleksandr (or Alex) Averbukh.

My first encounter with Alex occurred at the 1999 World Championships. He immigrated from Russia only a month before that, and in the Championship’s program he was still listed as Russian. Alex was previously a decathlete, with a PB of 8084 points, a whole THOUSAND points better than the Israeli embarrassing record of 7096 (WTF?!). However, by then he already shifted his career to the Pole Vault. I must admit, I never heard of him before the championship, but in Seville he shocked everyone by winning the bronze medal. I still remember the excitement of when it happened – Israel won a medal at the World Athletics Championship! Wow! Averbukh competed with vaulters who were way more celebrated and more experienced than him, but it was he who managed to win the bronze medal with a result of 5.80m, which was also a new NR. Interestingly, he shared the podium with two more Soviet-born vaulters, but only one of them actually represented an ex-Soviet country – Maksim Tarasov (Russia), who won the gold vaulting an unbelievable height of 6.02m, and grabbing his head in amazement afterwards. The silver medalist was Dmitri Markov, who represented Australia.

But anyway, it’s a post about Averbukh, isn’t it? And so, after that world championship, Alex became a household name in Israel. Even though he didn’t have a good Olympics in Sydney, he managed to bounce back after that, and had a stretch of 3 years during which he was arguably the best pole vaulter in the world. And it all started at the World Championships in Edmonton.

During the summer of 2001 I was traveling in Europe with my parents and my cousin, Roman. Of course, a vacation is always a great experience, but this one coincided with some of the World Athletics Championships. There is a chance my memory is deceiving me, because it all happened 13.5 years ago, but if I’m not mistaken every evening I stayed at the hotels we were in to watch the competitions. I even convinced Roman (we shared a room), who was not a T&F fan, to watch it too, and for that week or so he also became interested in T&F, although that enthusiasm didn’t last long after we returned home.

Anyway, I remember watching the pole vault final (not sure whether Roman watched it too). Markov was at the peak of his form back then, and no one could touch him (insert MC Hammer song here). He won the gold medal easily, clearing 6.05m at his second try, joining Tarasov as the vaulters who jumped higher than any man not named Sergey Bubka ever jumped. But Averbukh had a great performance of his own, entering one of his “zones” and clearing 5.85m on his first attempt!

That first attempt proved to be crucial, because it was it that enabled Alex to win the silver medal over the likes of Nick Hysong, Michael Stolle and Romain Mesnil. So now Alex was a two-time medalist in the Athletics World Championships! Wow… Israel never had such a great athlete. But more great things were to come.

In the summer of 2002 I once again went on a vacation to Europe with me mom and dad (I feel like being an Irish for a bit). We were minding our own business at the Ben-Gurion airport here in Israel, when suddenly – who is it that we see there, standing in the electronics shop?! It’s Alex fucking Averbukh!!! OMFG!!! I don’t remember who saw him first – me or dad, but I clearly remember my excitement as we went there to say hi. I was so excited I actually remember shaking a bit. This was Alex Averbukh! A two-time medalist at the Athletics World Championships! And I was a 15 year old who just happened to meet one of his all-time favorite athletes. I dare you not to shake, I double dare you, motherfucker! We went over to him and had a brief chat. I was really, REALLY excited, but I managed to say a few words to him. Dad did most of the talking, though – he was also a great fan of him. In all the excitement, I actually forgot to ask him for a picture, but I did ask him for an autograph, which you can see here: 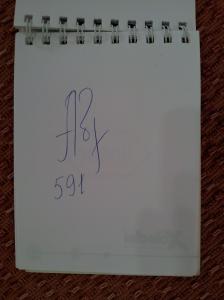 His autograph is a mix-up of English and Hebrew. I obviously knew then that 5.91 was his PB back then (and a NR of course), and he confirmed it. Two years later he improved it to 5.93m, but failed to join the “6 meters club”. Anyway, he sounded really humble when we talked, and my sympathy for him only grew. When we said goodbye, I wished him luck in the European Championship, which was due in a month or so. I like to think that me wishing him luck was the reason behind his great triumph there.

The 2002 European Athletics Championship was held in Munich, which was somewhat symbolic, as it was exactly 30 years after the massacre at the Munich Olympics, when 11 Israeli athletes were murdered. And it was perhaps Averbukh’s finest hour, when he cleared 5.85m at his first try, to win the gold medal and become the European champion. When he was draped in the Israeli flag on the podium and our national anthem was sounded – he started to cry. Here, at home, I believe a tear or two (or a dozen) escaped my eyes too. It was a really emotional moment.

(1:25. It’s in Hebrew and it’s highly recommended to watch all of it in you know Hebrew)

In 2003 he set his PB, of 5.93m, but failed to qualify for the final at the World Championships. A year later he once again under-performed at the Olympics, and I thought that his glory days are probably over.

At the next European Championships, held in 2006 in Gothenburg, Alex was already 31 years old, and I was deep into my army service. Nevertheless, I managed to watch the competitions while at my army base. The qualification stage of the pole vault did not look promising. The conditions were terrible, it was raining as fuck, and Alex struggled with a rather sub-par height of 5.45m, and failed it twice, before it was announced that because of the horrible conditions all the vaulters who were still competing will be promoted to the final. I really felt that this is what saved Alex’s neck, because with the way he looked I doubt he would have managed to clear 5.60m. So it was really lucky. 20 vaulters made it to the final, and there Alex did the unimaginable and managed to repeat his triumph from 4 years ago in Munich! The level of competition was such that he was the only man to clear 5.70m, but this proved to be enough for the gold medal.

I took a break (not sure it was authorized, but who gives a fuck now) from my duties at my army base to watch the final on the TV in my room. When Alex won the gold medal, I couldn’t contain my joy and I sprinted outside, shouting about Alex’s triumph to anyone around. I burst to the lab where I was supposed to be working and informed everyone that we now have a two-time European champion in pole vault. Naturally, no one was as excited as I was on hearing the news, people looked at me like I was crazy or something, but I couldn’t care less. It was a truly glorious moment…

After that Alex produced one more moment of glory, at the 2007 World Championships. He easily cleared 5.65m at the qualifications, and then jumped 5.81m in the final, but it was only good for 7th place because he cleared it on his third attempt. Had he cleared it on his first attempt, he would have won a bronze medal… That was his final great moment. He failed at the Beijing Olympics, and retired a year later.

Now, I really liked Alex not just because he was an Israeli successful athlete who managed to bring us glory in a field where we never had any. There was something very humble and simple about him, and he always seemed like a really nice and shy person. I thought about it a lot, and I’m sure that even if he was representing Russia or some other country – he would have still been one of my favorite athletes. Plus there was the similarity between us – he was also an immigrant from Russia who came to Israel to make a new life to himself, just like me family (here’s that Irish Michael again!). He struggled with Hebrew and was also maybe too shy and humble to deal with the establishment here, which never really supported him the way it should have supported an athlete of his caliber. His achievements – unparalleled in Israel’s track & field history, didn’t get the recognition they deserved. If Alex was living in a true sports-loving country, his life would have been better finance-wise and recognition-wise. After all, we’re talking about a three-time European champion (he also won the 2000 European Indoor Championships) and two-times medalist at the World Championships. During his prime, let’s say for the decade 1999-2009, Averbukh was constantly one of the top pole vaulters in the world, a lock for the top 5 for that era.

Also, it’s interesting to fantasize what would have happened if he didn’t abandon his decathlon career. He could easily break the Israeli NR, like we’ve seen. Plus, many of his PB’s in the various decathlon disciplines would have earned him a placing in the top of Israel’s all-time results. Yes, this is an athlete of a caliber we never had, and who knows if we ever will…

He wasn’t without shortcomings, though. He had this annoying tendency to skip heights, not unlike Yelena Isinbayeva. Watching him do that in a major competition could sometimes drive me mad. When it worked – he was king. But it didn’t work all the time, and those were the most challenging times for me as a spectator, who always wanted Alex to succeed. I would have preferred him to be a diligent vaulter, like Mutaz Barshim is in the high jump – Barshim doesn’t skip heights, he jumps all of them, like a model student. I understand the logic behind skipping heights, but still – I wonder what would have happened if he wasn’t employing that strategy…

But nevertheless, Alex was an awesome pole vaulter. And  he deserves to be enshrined in our Hall of Fame. You go Alex!